Denso is a global active Japanese automotive supplier and has also been producing in Hungary since 1997 for well-known automotive brands such as Audi, General Motors and Suzuki. At the site in Székesfehérvár, a city located between Budapest and Lake Balaton, Denso Manufacturing Hungary Ltd. primarily produces mechatronic and electronic components for vehicles with nearly 4,000 employees. Energy efficiency is not only an important issue in mobility, but also in the production process itself. The generation of compressed air accounts for around 20% of energy consumption at the plant. Therefore, the Energy Scouts Ágnes Sebestyén, István Csordás, Ferenc Németh and István Sipos chose compressed air as focus for their practical project.

Checking compressed air systems for leaks
The greatest savings were made by eliminating minimal leaks in the compressed air network and production machinery. The employees in this area were sensitized to recognize and report leaks immediately. New compressed air nozzles have been installed on two machines, reducing air consumption by 25% while increasing efficiency with pinpoint accuracy. The conversion has proved successful, so it will be applied to further machines soon.

Pneumatic pump converted to electric drive
More challenging was the adaptation of a drill grinder, where the scouts replaced two pneumatic driven pumps with an electric driven pump. A suitable electric pump did not previously exist, so the team developed it within the project. As a result, they significantly reduced the number of wearing parts and saved about 20% of the energy consumption of the old pump. The new pump works excellent on the tested machine series, so this improvement will also be transferred to other machine series.

Thanks to the above measures, Denso can save 1,781 MWh of electricity and €160,940 annually, as well as reduce carbon dioxide emissions by 408 tons annually. The short payback period is outstanding – after just 100 days, the project is already economical and saves energy costs day after day.

The Denso team convinced the jury and won the competition for the best Hungarian Energy Scout project 2020.

The Energy Scout team inside the compressor hall. (©Denso) 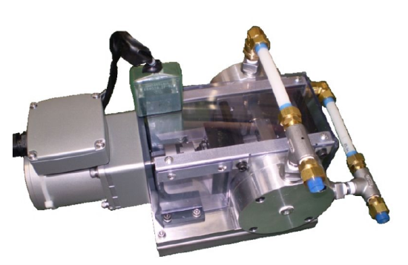