The Croatian company Multinorm d.o.o. is located in Cerna, a village in the east of Croatia and specializes in the development and production of fixtures and tools for welding in the automotive industry.

Given the current drastically rising energy prices, Energy Scout Dario Lovretić had one goal in particular in mind: cost reduction in Multinorm d.o.o.’s primary power sources. To reduce electricity consumption as much as possible, he initially envisioned a 499-kW PV system on the roof of the production facility in Gradište. However, during the Energy Scout training organized by AHK Croatia, he realized that the PV system on its own was not enough to cover the company’s entire electricity needs. However, he learned that there are various opportunities for additional savings and long-term cost reduction opportunitiesthe, key is to increase energy efficiency, i.e. to reduce energy consumption..

Although the manufacturing facility was built in 2018, making it still quite modern and high-end, the newly trained Energy Scout recognized untapped savings potential concerning the lighting which was already in place. The first step was to replace the existing fluorescent tubes with new LED lighting. The previously used lighting had a significantly higher installed capacity of 44.6 kW and an annual consumption of 240,820.78 kWh. By replacing a total of 163 industrial lamps, it reduced the installed power to 18.05 kW and the annual consumption to 97,492.68 kWh. This way, the company saves 143,328.10 kWh per year, which results in a saving of 32,460.38€ per year considering current electricity prices. In addition, the newly installed LED lighting reduces CO2 emissions by 20.8 tons per year.

With the switch to LED technology, the modern production facility received suitable and high-quality lighting that – in addition to electricity savings and CO2 reduction – creates a better working environment for employees because it has a higher luminosity. Thus, Energy Scout Dario Lovretić also took into account factors such as light color temperature, color rendering factor and luminous intensity when drafting his practical project. The light color temperature now used is 4000K with a min. color rendering factor of Ra>80 and a service life of min. 60,000 h at a luminous intensity of more than 500 lux/a. Since the very warm color creates additional comfort and easier operation of the equipment, all these factors increase work safety. Already now, the enthusiasm among the employees – now optimally illuminated – cannot be overlooked, as the measure developed by the Energy Scout has already been implemented in the company.

In the second step, Energy Scout Dario Lovretić tackled his goal of reducing dependence on local electricity suppliers while continuing to drive forward significant electricity savings. The construction of a photovoltaic plant was the logical consequence for him.

Since the Gradište production facility operates in three shifts, six days a week, the annual electricity consumption is 1,154,831 KWh. On the limited roof area of 4,750 m2, they wanted to produce as much electricity as possible. Therefore, for the installation of a solar power plant he opted for highly efficient solar modules from the USA. The first modules have already been delivered and were successfully installed. The intended and complete power plant will consist of a total of 900 photovoltaic modules with an individual output of 555 Wp at an efficiency of 21.48% and will have a 30-year guarantee on the output power at a linear degradation of the modules of 0.55% per year. Thus, a power output of 499 kWp and an expected annual power production of 596,240 kWh is anticipated. Cost savings of 135,034.09€ per year can be achieved as a result. The power plant itself will reduce CO2 emissions by a full 86.5 tons per year.

Thanks to the use of existing subsidies from EU funds for the structurally weak region, within the framework of which 50% of the investment costs for sustainable lighting conversion and a full 70% of solar energy investments are subsidized, the practical project has an extremely low payback period of 1.46 years. The company is expected to produce its own electricity by the end of the year after the completion of the construction of the photovoltaic system, covering 64% of the company’s existing electricity costs.

The Young Energy Europe jury in Croatia awarded Dario Lovretić second prize for his practical project in the course of the 2022 national award ceremony. 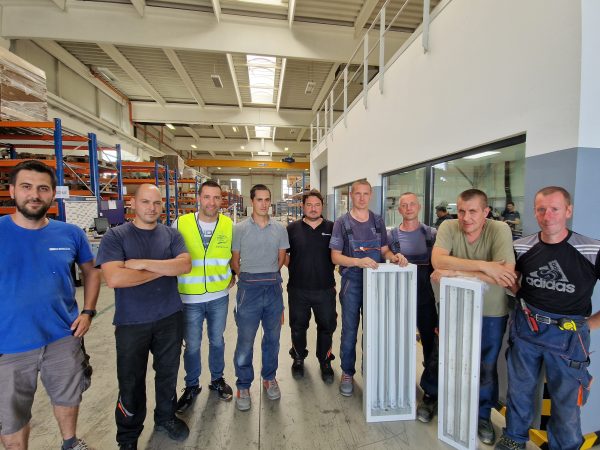 Final measurements on the roof and installation of the first solar modules. ©Multinorm d.o.o. 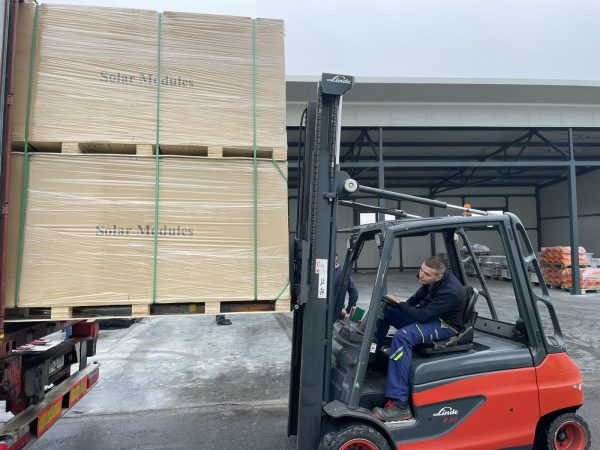