With 26,000 employees in 23 countries, family-run Brose is one of the worlds’ s largest automotive suppliers. Brose produces mechatronic components and systems at two locations in the Czech Republic. More than 2,500 employees in the Kopřivnice factory produce components for car seats, doors, and air conditioning systems. Among them the interdisciplinary Energy Scouts team, consisting of Petra Bradáčová (Finance Department), David Marek (Logistics) and Jiří Vaculík (Facility Management).

The challenge: During the increasingly dry summer months the company’s green spaces require additional irrigation. To reduce water consumption, the scouts plan to collect rainwater from the factory roofs underground. The reservoir will have a capacity of 1,000 m³ to provide a ten-day reserve for night-time irrigation of the surrounding green areas. In addition, the constant underground temperatures of 7-11°C provide an additional advantage as cold storage. The water can be used to pre-cool the ventilation systems in the production halls and can also cool the welding processes by using heat exchangers in a second step.

Water reservoir and cold storage
These measures significantly reduce the energy consumption of the existing air conditioning systems used in the production halls. A 1°C reduction of the room temperature by pre-cooling saves 5% energy, equivalent to about 70 MWh per year. The cooling of the welding processes via a heat exchanger can substitute one or two compressors of the cooling system and save another 116 MWh per year.

The project is technically demanding – especially due to the interaction with the production process – and requires substantial investment. The calculated payback time of 18 years is still too long. Yet, wth increasing drought periods in summer, an expected increase in water prices and the threat of water rationing by the authorities, the project might be realized within a shorter payback period.

The jury awarded the project as second-best project in the Czech Republic 2019 because of its innovative character.

Rainwater is collected to supply the green areas in dry periods. (©Brose)

The increasing drought of the soil (here summer 2019) is a growing issue in Czech Republic. (©www.intersucho.cz) 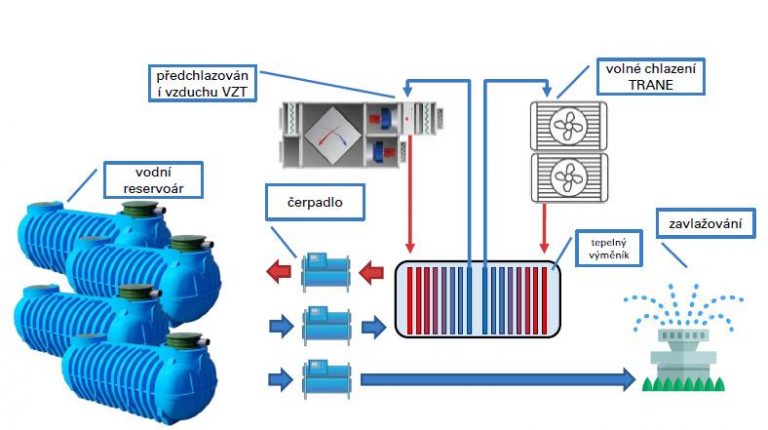