The young team of Dronamics EOOD has been developing transport drones in Sofia, Bulgaria since 2014. The goal is a fleet of (partially) autonomous, satellite-based unmanned aerial vehicles that can transport up to 350 kg of cargo with a range of up to 2,500 km. They are designed to enable fast deliveries to hard-to-access areas. The prototypes, featuring classical aircraft design, are robust and suitable for landings on short sand and grass runways. Dronamics aims at transport costs of minus 50% compared to conventional air freight providers.

Every component requires a mould
Efficiency is key for Energy Scout Lyubomir Gerasimov. He is working on the development of the “Black Swan” prototype, currently in scale 1:4 (video link). Many of the drone’s components are made of fibre composites. For this purpose, carbon or glass fibres are melted with epoxy resin in a mould. Typically, these complex moulds are manufactured either subtractive or by addition. The choice of the production method depends on the requirements on the components, the limits of the production processes as well as on the later operating conditions of the component.

The good results have motivated the Dronamics team to review the potential of additive manufacturing not only in mould making and manufacturing but also in other operational activities such as spare part management. 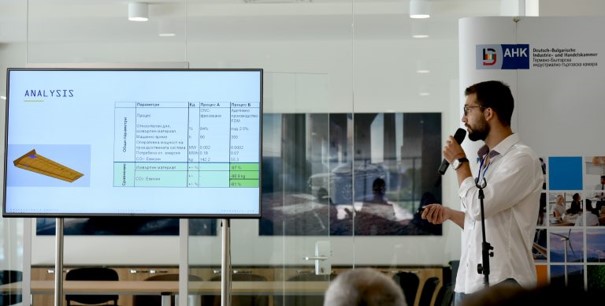 Illustration of a wing and its moulds (©Dronamics)
Resource Efficiency
Previous Post
December 2019 – Modernization of lighting at Kermi in the Czech Republic
Next Post
February 2020 – Energy Scouts save water, energy and fuel at Madeta in Czech Republic
Menu